Calasanz as an Instructor

Calasanz as an instructor has always had a unique and real way of training his students.  Not only through teaching but also by making each of his students partially responsible and accountable for their own training and learning.  Calasanz' approach to teaching created the fiercest and most feared competitors in the world of Martial Arts out of local, every-day people.  It is simple fact that he could, can and did take anyone with the guts and dedication to achieve and made them superb Martial Artists.  His system and style of teaching continues to evolve further beyond and above anything else out there as it always has incorporating Body, Mind and Spirit.


"Do not forget.  Not everyone listens or wants to understand the real meaning of coming to a real and unique system like the Calasanz Physical Arts System." - Calasanz

You can research and answer for yourself how he did it.  The way he created the name and the way he trained those who brought the name to the highest level of fighting was by using the people that he trained under intensive training programs.  This means action.  He did it by putting his most apt and well-trained students up against those who wanted to compete.  It is an action based system and Calasanz always knew that discourse based learning within Martial Arts is severely limiting, is no way to become talented and will never make you superb outside of theory.

There are stories upon stories about Calasnaz' students.  Those every day investors or scientists coming in looking for a hobby or to get an idea of how to defend themselves ended up being more skilled even than those training to compete.  He would regularly pit competitors walking in against his students, even those with limited training, many of those training to compete would then buckle under the trauma of their iron shins, throw in the towel, or even end up hospitalized.  Why?  ...How?  Because this is a system based on reality.  Head movement.  Power.  Coordination.  Technique.  Grounding.  Endurance.  The results speak for themselves and show how Calasanz as an instructor knew how to do it then and knows how to do it even better today. 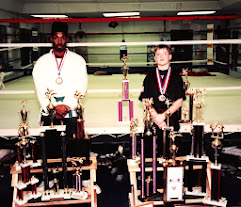 The methods.  The training.  They're effective.  It's undeniable how capable and talented his pupils are and have become through their training and time spent here.  The people, the history, the reality, they are impossible to ignore and cannot be dismissed.  Understand, this is not like anything else ever seen before, at least on such a transparent and global level.  This is the birth of a rooted, universal, modern and evolved Martial System happening before our very eyes without veil, smoke-screen or diversion.  Sober up and open your eyes.  Calasanz is not teaching some other person's system (although he has many he can draw from).  He is creating one.  His vast background of study, his lifetime of dedication to The Art, his extensive training and voluminous experience teaching thousands of others are actual facts, not fantastical stories.  His experience and knowledge of the Martial Art is something that will be near impossible for anyone to surpass.  Calasanz, with the revelation of his system, has completely let the cat out of the bag for the world to see and indeed it is a VERY big cat.

Posted by Alan Wedell at 6:26 PM No comments: